Every September, the entire sea is celebrated, particularly with the Cannes Yachting Festival from 11 to 16 September, which figures among the most important nautical events in the world, and the Royal Regattas from 22 to 29 September, a historic competition for majestic large sailing boats, rivalling each other in charm and speed. A true yachting paradise, Cannes has four communal ports boasting almost 2000 moorings.
A town that is traditionally and naturally focussed on maritime activities, visited since the beginning by the greatest seafarers, and boasting a Yacht Club since 1864, Cannes has been able to establish itself as a flagship town for the nautical event, especially through its International Yachting Festival, the first of its kind in Europe, and its Royal Regattas, a veritable global institution in the kingdom of noble sailing ships and great seafarers. 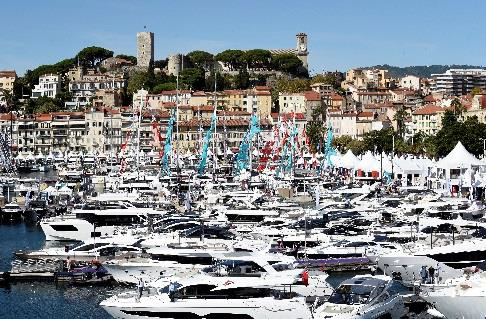 Cannes Yachting Festival – from 11 to 16 September 2018
From 1977, the biggest nautical fair afloat in Europe has been held in Cannes every September. Today, it welcomes 50,000 visitors to the Vieux Port and Port Canto, as well as to the Palais des Festivals et des Congrès. Over 600 ships are present, afloat and on land, from 2 to 65 metres, of which over 200 are making their first appearance. The Festival exhibits 150 yachts of over 20 metres in length, 110 sail boats, 45 second-hand boats and 47 multi-hulls, including 12 motor yachts. The Cannes Yachting Festival brings together the nautical industry and the world of luxury in the Luxury Gallery at the Palais des Festivals et des Congrès, by inviting luxury brands that represent the art of living on a grand scale. It allows exhibitors and luxury brands to make themselves known to an international public comprising demanding visitors and professionals, brought together around two complementary worlds: yachting and luxury.
Somewhere between a B2B and a B2C fair, Cannes Yachting is the link between summer and the professional events that are returning to punctuate a year rich in events. 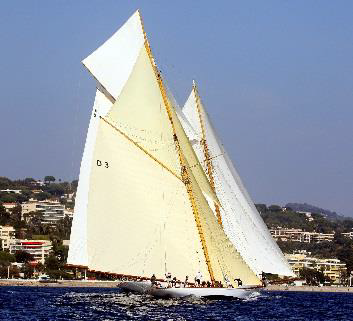 40th anniversary of the Royal Regattas – from 22 to 29 September 2018
This historic Cannes event was reborn in 1978 in its current form and invites seafarers to express their passion for sail. For this 40th anniversary of the Royal Regattas, more than 200 classic ships and 70 Dragon boats are expected to celebrate in this exceptional setting in the Bay of Cannes, around the Lérins islands, a choice backdrop for the maritime jewels that are traditional yachts. These legendary sailing boats – some of which are listed historic monuments – will once again offer the sublime show of their changes when at sea.

Spotlight on seafarers – on 13 and 15 September 2018
The yachtswomen from the Cote d’Azur, Alexia Barrier, will reveal her prints on Thursday 13 September at 17:30, when she will join the maritime “Walk of Fame” in the forecourt of the harbour master’s office at Port Canto. On Saturday, 15 September, the young Arthur Le Vaillant, yachtsman, high level sportsman and entrepreneur will share his story via the TEDxCannes conferences, on the stage at the Théâtre Debussy in the Palais des Festivals. Both will be participating in November in the 2018 Route du Rhum with the common goal of qualifying for the 2020 Vendée Globe.

Cannes is a historically sporting and naturally maritime town. Its geographical location on the Mediterranean coast offers the perfect playground for major nautical events. Among the 270 sporting events organized in Cannes throughout the year, September undoubtedly embodies yachting month.

HISTORIC REFERENCES: CANNES AND YACHTING
Cannes has always looked out to sea, and yachting is intimately linked to its history and its development.
1838: the first stone was laid at Cannes Vieux Port.
Before 1860: fishermen competed in several paddle-boat races on La Croisette point.
1857: the Parisian, Léopold Bucquet, nostalgic about the Regattas on the Seine and fascinated by the blue waters of the harbour, designed the first premier to navigate the waters of Cannes, the Alma. It was produced by Honoré Arluc, a local shipbuilder.
1859: the first amateur yachting regatta in the history of Cannes was organized by Léopold Bucquet.
January 1860: the first Cannes Regatta Society was formed. Foreign “winter residents” came and took part in the Cannes Regattas.
1864: the Cercle Nautique de la Méditerranée (Mediterranean Nautical Circle) was created on La Croisette, thus establishing the building blocks of yachting in Cannes.
1891: the Union des Yachtsmen de Cannes (Cannes Yachtsmen’s Union) was created and attracted the royalty of England, Russia, Denmark and Sweden.
1894: the Prince of Wales, the future King Edward VII of Great Britain, participated in the Regattas.
1929: birth of the Royal Regattas, in honour of the King of Denmark, Christian X.
1929-1939: the golden age of the Royal Regattas: Cannes attracted yachtswomen and yachtsmen from all over Europe.
1946-1977: Development of light yachting and sailing cups.
1974: Cannes, the first place windsurfing was established in France.
1977: 1st International Yachting Festival.
1978: Jean-Pierre Odéro, Yachting Director at Cannes Town Hall relaunched the Royal Regattas, a trial open to International Class sailing yachts.
2013: the International Yachting Festival is confirmed and becomes the Cannes Yachting Festival, a truly globally yachting meet.
THE PORTS OF CANNES
The Vieux Port - 724 moorings: right in the town centre. While passenger transport today constitutes its main activity, it is split between coastal navigation and cruising. As far as cruising is concerned, Cannes represents one of the main destinations in the Alpes-Maritimes and in the region. Yachting activity represents over 50% of the port’s turnover and has thus become essential. The “Cannes Yachting Festival”, which takes place every September, has become an unmissable event in the yachting world. In addition to the commercial activity that sets it apart, the Vieux Port is a port with a strong events identity, directly linked to the life of conferences in Cannes, particularly due to its proximity to the Palais des Festivals et des Congrès.
Port Canto - 553 moorings: the town’s largest yachting port, located at the Eastern end of La Croisette, it can welcome ships up to 90 meters long. This port is a port for medium-sized and large yachts.
Port du Moure Rouge - 450 moorings: it can host boats up to 8.99 metres. It is a family port for small yachts.
The Port de la Pointe Croisette - 272 moorings: the “Yacht Club de Cannes” is located here, where it also provides sailing lessons and organizes the “Royal Regattas”. It is also a family port intended mostly for sporting use.