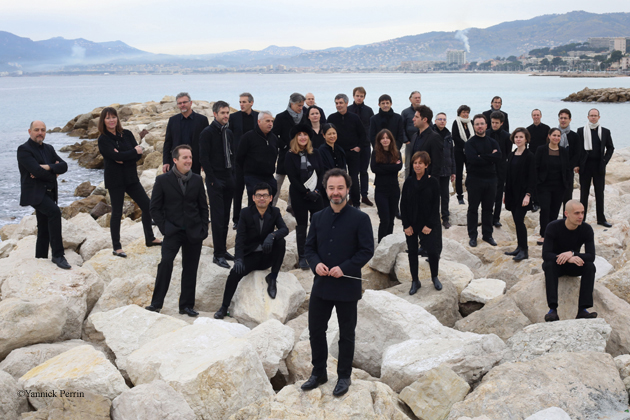 This global creation was the chance for an exceptional collaboration between the choreographer Marion Lévy, the Scale Collective, the Cannes Provence Alpes Côte d’Azur Orchestra, directed by Benjamin Lévy and the Rosella Hightower Pôle National Supérieur for Dance.

Mother Goose is a refined and light work by Maurice Ravel written from the tales by Charles Perrault (Sleeping Beauty, Little Thumb), Madame Leprince de Beaumont (Beauty and the Beast) and Madame d’Aulnoy (The Green Serpent), which were transposed into ballet. This adaptation with a fantastical atmosphere is counted among the most successful of Maurice Ravel’s works in the choreographical field.

Marion Lévy has seized the tales delicately and with humour, in order to debunk them: what if Sleeping Beauty refused to wake up? What if the wicked queen was really more beautiful than her stepdaughter? What if Little Thumb had commercial desires?
Marion Lévy transforms the score into a playground for musicians and dancers with boldness and mischief. It must be said that the choreographer, full of self-derision, loves to have her writing confronted by other artistic languages: music, prose, video, light…
Mother Goose is a unique musical and visual adventure. An orchestral dance, a concert embellished by movement and the corps and by the bright installations from the Scale collective.
This project is the chance for a collaboration between the Rosella Hightower dance school and the Cannes Orchestra. Pupils from the dance school will be involved in the project. They will work closely with the body of musicians. Likewise, the orchestra itself will be called upon to dance. The music will thus be enhanced by the dancers’ movements and the choreography will underline the poetry and marvel of the music, all coordinated by Marion Lévy.

A message from Brigitte Lefèvre: Bringing together the Cannes Orchestra, directed by Benjamin Lévy, Marion Lévy, an artist associated with the Grasse Theatre and the dancers from the Rosella Hightower dance school all naturally fall within the partnership that we are forming around this Cannes Côte d’Azur Dance Festival.

Trained at the Centre National de Danse Contemporaine [National Centre for Modern Dance] in Angers, Marion Lévy was a member of the Rosas company directed by Anne-Teresa de Keersmaeker from 1989 to 1996. In 1997, Marion Lévy founded the company Didascalie and in particular created L’Amusette, La Langue des Cygnes, Dans le ventre du loup, etc. She also worked for the cinema and the theatre. In 2015, she produced two pieces in conjunction with Mariette Navarro and Joachim Olaya: Et Juliette and Les Puissantes. And in 2019, Training.

After having been trained at the CNSM in Lyons and Paris and distinguishing himself at a very young age, winning the title of “musical revelation of the year 2005”, and in 2008 the “Young Talent – Orchestra leader” prize from the ADAMI, Benjamin Lévy, very active on the European symphonic and lyrical stages, was appointed in November 2016 as the musical director for the Cannes - Provence Alpes Côte d’Azur Orchestra.

For more than 40 years, the Cannes Provence Alpes Côte d’Azur Orchestra has travelled the roads of its region and set its instruments down, for the length of a concert, in auditoria, schools, churches, sylvan theatres and pop-up stages in the heart of nature, always with the same enthusiasm. The Orchestra constantly seeks to offer the public innovative and daring programmes, carried by famous and top-flight artists.