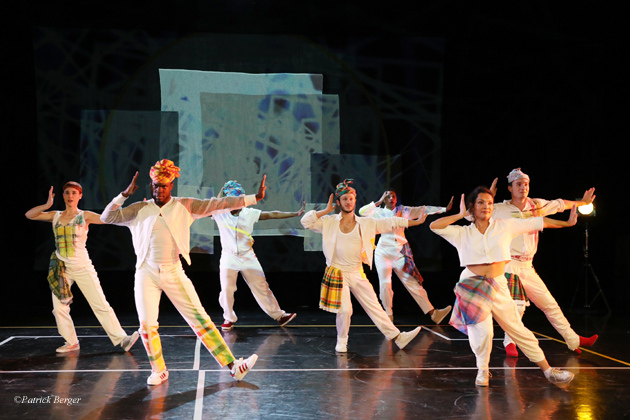 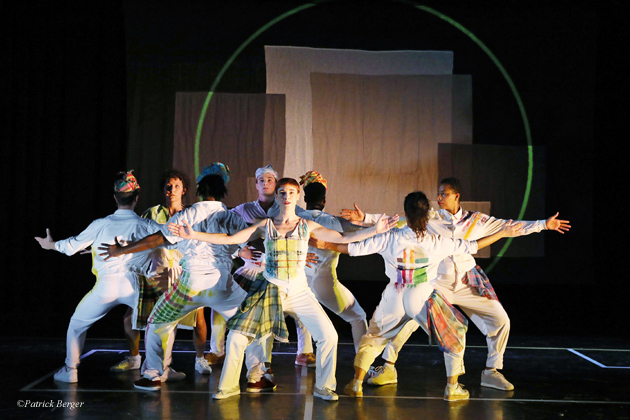 An incongruous cocktail evening that revisits square dance moves and electrifies them with the energy of urban dance.

The famous performer from Montalvo-Hervieu and the Ballets C de la B, Chantal Loïal will soon have celebrated 25 years as a choreographer. Cercle égal demi Cercle au Carré represents three years of research, work and multiple journeys between the West Indies, Guiana and Europe. Far from being a mathematical formula, the title is first and foremost choreographical, as it designates the forms from square dance and other social dance at the heart of this ambitious creation for 9 dancers and 4 musicians. The choreographer, who is originally from Guadeloupe, intends to reinterpret in her own way this court dance imported in the 18th century by colonialists to the West Indies and Guiana where, re-appropriated by the slaves, it formed the origin of Creole dance. Furthermore, everything starts with an exhibition of this Creole-style dance with four, literally captivating, traditional couples. A sort of imposed dance, which responds to “commands” before being deployed in a multitude of free variations anchored in the urban dances of the here and now. Square dance, Boulangère, Haute-taille and Beguine are supported by performers from Hip-hop, Krump, Ragga, Voguing… and musicians as at ease with traditional music as with electro. Chantal Loïal, with her company Difé Kako, dusts off century-old dances, in a fabric and weave that is every bit as good as Madras cotton; colourful squares of ornate fabric that punctuate the show’s costumes. Joyous and sparkling, Cercle égal demi Cercle au Carré is a précis of this crossover West Indian culture that combines song, music, prose and dance with lightness and unequalled finesse.

Chantal Loïal is generosity incarnate. With this piece she makes us feel this in particular by evoking these traditional dances that are dear to her and by uniting them with her own choreography. She left a mark on the public as part of the Montalvo-Hervieu company, asserted herself as a choreographer, but also as a woman and a representative of a culture and a dancing tradition.


Chantal Loïal, born in Pointe-à-Pitre in Guadeloupe, learned the traditional dance of the West Indies. In 1977, she discovered African dance in Paris. She joined African ballets, such as Lokolé and Lemba in the Congo, the Georges Momboye company in the Côte d’Ivoire, and then she accompanied singers and groups from West Africa, such as Tchico Tchikaya and Kanda Bongo Man. She was noticed as a performer in Paradis by José Montalvo and Dominique Hervieu, before creating her own company Difé Kako in 1994. She claims her Creole identity and campaigns for a mixed choreography. While proceeding to broadcast her shows, Chantal Loïal has continued to work with the ballets C de la B from 2008 as well as with the Montalvo-Hervieu company. Today, she is fully devoted to Difé Kako and to the Kreyol Month Festival, created in 2017.