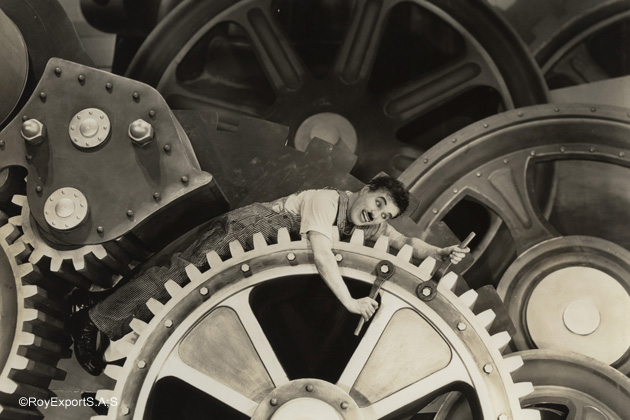 The score of Modern Times has been restored by Timothy Brock
Modern Times marked the last appearance of The Tramp, the character that
brought Charlie Chaplin world fame, and who remains the most universally
recognised character in history. He shared and symbolised the suffering of all the
underprivileged of a world that was just emerging in the 19th century. In Modern
Times, he found himself faced with some entirely new predicaments in the
aftermath of the American Great Depression, as mass unemployment coincided
with the rapid development of industrial automation.

By the time Modern Times was released, sound cinema had already been
established for nearly ten years. Until then, Chaplin continued to reject dialogue,
knowing that the universal impact of his comic style lay in its silent pantomime.
As in City Lights, this film would only feature music and sound effects. The
only human voices heard are filtered through technological processes. To this
day, Modern Times offers a commentary on human survival in the industrial,
economic and social context of the 20th century. Its human message remains
particularly relevant in the 21st century.